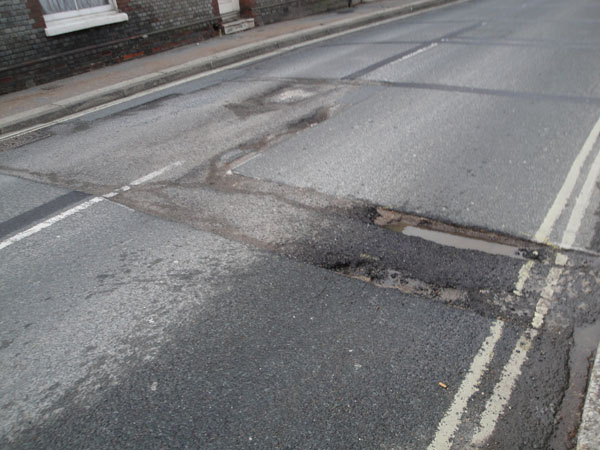 According to a report released last Thursday, damaged road conditions in NJ are costing the state a whopping $11.8 billion annually, leaving the average driver to shell out about $2000 per year for the cost of their own auto repairs, wasted fuel, and lost time.

The report comes from TRIP, a national nonprofit transportation research group funded by insurance companies, equipment manufacturers, highway engineers, and other organizations concerned with safe and efficient surface transportation. With this report, TRIP wants to make sure that drivers not only understand the condition of NJ roads, but exactly how these conditions are impacting their pockets on a yearly basis.

Although just one week earlier NJ Transportation Commissioner Jamie Fox indicated that bad roads cost the average driver $600 in automotive repairs per year, TRIP’s significantly higher estimate also factors in the cost of traffic congestion and crashes which can result in injury and lost productivity.

According to TRIP spokeswoman Carolyn Bonifas Kelly, “the $600 cited by the commissioner only includes what we call operating costs,” which means the cost of accelerated depreciation and additional tire wear and tear repairs. “We look at road and bridge conditions, traffic conditions, and economic development...three components of extra operating costs for drivers,” Kelly said. Based primarily on federal sources, the report draws on data from the Federal Highway Administration, the National Highway Traffic Safety Administration, and the Texas Transportation Institute.

According to the report, more than one third of the state’s major roads and highways are in poor condition while more than one-third of its bridges are structurally deficient or functionally obsolete. Adding to the problem is increased congestion on the state’s major urban roadways, which results in motorists wasting significant amounts of fuel and time. Further, the report indicates that NJ’s rural roads have a fatality rate 2.5 times higher than that of all other roads combined. Below is a break down of just how costly the problem really is for the state and it’s motorists:

The efficiency and condition of New Jersey’s transportation system, particularly its highways and bridges, are critical to the health and general welfare of the state’s economy. Increased investment in transportation improvements at the local, state, and federal levels could relieve traffic congestion, improve road and bridge conditions, boost safety, and support long-term economic growth in NJ. But despite its noble and important mission to spread awareness on how poor road conditions can affect the average NJ driver’s bank account, TRIP has not taken a position on exactly how the state should go about raising the revenue to fix these problems. And with the state Transportation Trust Fund set to run out of money for road, bridge, and transit work on July 1, time is of the essence to find a solution for the lack of funding. Ever since headlight beam selectors began being placed on the steering column of automobiles, drivers have engaged in headlight flashing,...
Read More
Adam H. Rosenblum
March 7, 2014

A report was published last year by the Society of Automotive Engineers that confirmed failing to use turn signals causes...
Read More
Adam H. Rosenblum
February 25, 2013

It was recently announced that after nearly 50 years the Rochester Traffic Violations Bureau or “TVB” - which is a...
Read More
Adam H. Rosenblum
March 26, 2018