There are few reasons why local police or any law enforcement would take possession of your vehicle. We use the term “voucher” to describe this process. Basically, to “voucher a vehicle” simply means that we are taking possession of it and itemizing what is inside. Most police officers try to avoid taking away a vehicle because we know the steps involved to recover an impounded vehicle is both costly and time-consuming. Still, there are times when your vehicle will be removed from a driver’s possession.

1. DRIVING UNDER THE INFLUENCE

If a driver is pulled over and, based on training and judgment, the officer suspects he or she is intoxicated, a breathalyzer test will be conducted right there at the scene.  If a person fails to submit to a breathalyzer, even if not stopped because of an accident, they can be arrested.

While all New York State troopers are trained to do roadside sobriety tests, this is not the case for all other enforcement officers in the city. New York City has testing sites (called Intoxicated Driver Testing Units or IDTUs) where tests are conducted by the NYPD’s highway patrol and videotaped. These facilities are conveniently located in each of the five boroughs so we don’t lose much time from our initial encounter with a suspected intoxicated driver to when we get them to one of these testing sites. Once transported to the nearest IDTU, if a person still refuses to be tested, they will be arrested. In short, failure to submit to roadside or IDTU testing results in the immediate suspension of one’s license and arrest.

Although I’ve been discussing alcohol intoxication, this applies to drug use as well. People cannot drive under the influence of narcotics in New York. If an officer suspects the motorist is under the influence of drugs (e.g., marijuana, LSD, or some other narcotic), he or she will investigate and determine if that is, in fact, the situation. Levels of suspicion increase when a vehicle smells like marijuana, or if drug paraphernalia–or the drugs themselves–are visible.

If you’ve been arrested and your license has been suspended, you obviously cannot drive your vehicle. This may lead to it being impounded. It’s up to the officer. Sometimes, you may be allowed to contact someone (a family member or friend) who can retrieve the vehicle for you.

2. SUSPENSION OR REVOCATION OF LICENSE OR REGISTRATION

New York State is a bit black and white. If your license or registration is not up to date, it will suspend your license. If a driver is caught driving with a suspended license or registration in one of the five boroughs of New York City, they will be arrested and the vehicle taken will be taken away. Years ago, there was a required minimum of three suspensions needed for arrest; nowadays,  just one suspension can lead to arrest. Any revoked license will also result in an automatic arrest.

Once again, the decision to voucher the vehicle is up to the officer. Technically, they can take it, but most times they won’t.

There is an impound location in all boroughs of New York City, except Staten Island. We know it’s a long process to retrieve a vehicle if it's taken to one of these places. That’s why an officer will sometimes ask if a person has anyone who can pick up a car rather than impound it for a suspended registration or license.

We also know that suspensions aren’t always clear-cut. Oftentimes, people pay for an updated registration or license, or fine for something like a speeding ticket, then get pulled over before New York’s DMV computer system updates. It doesn’t immediately show a payment has been made and/or that a suspension has been lifted.  To avoid this situation, I recommend that you keep a receipt showing payment with you (on your person or in your vehicle). If you are pulled over, you can show the officer that you are in compliance and your vehicle will not be taken away.

If a driver cannot prove that the violation has been resolved but has never had any prior arrest, they will be processed at a precinct where a background check, including fingerprints, will determine if the motorist only needs to be processed at the precinct.  If clean, the driver will be released. If the background check yields an active warrant, failure to pay child support, or a conviction for something else, the driver will have to go through the entire legal process. This will entail going to criminal court.

This is one of the two most likely reasons a vehicle will be taken away. For serious accidents where injuries have occured, police will voucher the vehicle for evidence. It may also be that the vehicle is not safe to drive due to damage from the accident.

In these situations, an accident investigation team will show up to look for skid marks and other evidence that will help them determine how and why the accident occurred. If a driver is injured and the officer suspects that drugs or alcohol might have played a role, testing will be done at the hospital where they will be treated for their injuries, though a warrant may be needed before the test is conducted.

4. VEHICLE USED IN A CRIME

I would say any time a vehicle is used in the commission of a crime, it’s an automatic voucher. To my knowledge there are no exceptions to this practice. Most often, the crime has to be a felony, but it could also be misdemeanor like driving under the influence of drugs.

In these cases, police will not offer to allow the driver to have someone come and retrieve the vehicle. Instead, it will go to one of New York’s impound locations and, as I’ve noted, the process of getting it back will be lengthy and expensive.

If your vehicle has been taken away for any one of the reasons I’ve outlined here, you may want to reach out to an experienced attorney, especially if it was vouchered due to a criminal act, accident, or DWI.

When a driver decides to fight a traffic ticket, the first step is to plead not guilty and have the...
Read More
Adam H. Rosenblum
May 2, 2013 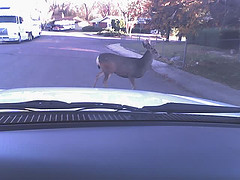 What to do if you hit a deer in NYS

It’s probably one of the most frightening experiences behind the wheel and it happens more often than we think.  You...
Read More
Adam H. Rosenblum
May 29, 2013